This article is written by Michael Margolis and originally published on PSFK.com, an online magazine devoted to marketing, art, culture, and design.

When it comes to street art, there is no greater artist on the scene than Banksy. As a street art superhero, Banksy’s satire and social commentary makes its mark around the globe from the Gaza Strip to Disneyland, and has pushed the boundaries of the craft into ever expanding new territory.

When Exit Through The Gift Shop, Banksy’s street art documentary hit the festivals and limited theatre release, culture sophisticates eagerly lined up to peer inside the mind of a modern genius. But they didn’t exactly find what they were looking for. And therein lies another interesting story.

The movie’s lead subject is not Banksy but rather Thierry Guetta, a Frenchman living in Los Angeles, who begins to film the exploits of street artists across the world. Through single-minded obsession, Thierry makes friends and films all the major players of the craft. For a while, he even shadows Shepard Fairy, working as his personal documentarian for several months. Through a convoluted series of events, Thierry eventually befriends Banksy, the enigmatic and mysterious trickster.

Without wanting to spoil the fun or give away how the story evolves…lets just say that Thierry Guetta soon transforms into Mr. Brainwash, an increasingly world-renown street artist and pop culture impresario. In the matter of just months, Thierry catapults from being an outsider looking in to becoming a significant figure in the universe of street art.

Certainly, his approach stirs impassioned debate and controversy, only further fueling his fame and commercial success. Mr. Brainwash’s much hyped debut show in Los Angeles sold over a million dollars of work in a matter of weeks. One might argue, his art had little intrinsic value until people began to participate in the public spectacle of his story.

You can’t help leaving the movie wondering, is Mr Brainwash for real, or is he just an elaborate construction of Banksy, pulling off his most ingenius hoax yet? Most art/culture hipsters are convinced that Mr Brainwash is just that, a symbolic trope for the commodification of street art and the complex dynamics of “selling out”. Critics argue, you can’t possibly call Mr Brainwash “real” art. Its all derivative, there’s nothing original, he didn’t pay his dues…Haven’t we heard this all before? 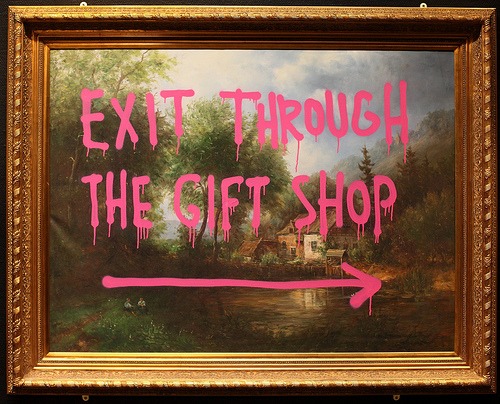 In many ways, Exit Through the Gift Shop is the ultimate act of pop art trickster foolery. A tradition first pioneered by the likes of Marcel Duchamp and PT Barnum, later modernized and re-contextualized by Andy Warhol and of course, the current reigning master magus, Mr. Banksy.

A Few Lessons in Cultural Storytelling

1. Real is only what we choose to believe

The smarter you think you are, the more you are convinced this movie is an elaborate hoax perpetuated by Banksy – as the ultimate act of poetic “fuck the man” cultural subversion. Yet if you accept the movie, along with Mr Brainwash at face value, you discover a greater gem hiding in plain sight.

Debating the existence of Mr Brainwash is just a red herring provocation. That’s not really the point. Exit Through the Gift Shop is meant to stir a deeper-inquiry into what we each perceive as real, what we believe holds value, and what are the rules for making it such. Whether you’re angry, baffled, amused, or inspired – your reaction to the movie — and what you believe are the boundaries and rules of artistic expression — is the true secret to be revealed.

2. What’s the story an audience tells themselves?

Beyond the story that’s being told and performed, audiences always hear and perceive a different story – the story they create in their minds about what it all means to them personally. The same principle that applies to baseball cards, wine, and wall street stock trading – applies to the craft of art. What matters most is the story that we tell ourselves. It’s through that process that cheap pieces of canvas with splotches of paint and ink transform into prized global commodities.

Art has often been romanticized as a noble pursuit at the sacrifice of social acceptance or financial success. Especially when it comes to street art, which by its origins reflects a punk aesthetic and radical creative self-expression. One might argue that reclaiming public space with art is a defiant act about the ownership of our mental environment and collective meaning-making.

To see street art elevated and commodified as part of the global art market is a contradiction some find hard to accept. And yet, it’s through its commodification that street art has gained credibility, mass appeal and global recognition. Apparently, even the mainstream has a growing appetite for social commentary. What happens to a society when the counter-culture becomes just an accepted part of the mainstream?

3. The meaning of any story lies in the heart

Emotion is the ultimate currency that propels any story forward and to its rightful destination. Sure, controversy and debate can be strong catalysts (especially in today’s hype-driven media). Yet at the end of the day, a story stands the test of time when it touches our souls in a meaningful way. Art should be judged in a similar fashion.

Perhaps its not accident that Mr Brainwash’s latest exhibit Icons, currently extended in New York City, explores these exact concepts. I had the chance to talk with Mr Brainwash last weekend, when his exhibit re-opened on Mother’s Day for an extended run through the end of May.

In gracious tones, Mr Brainwash shared the following with me, “…you cannot judge somebody from their first show. It’s the end of their life. You have to really see not only from your eyes but from your heart.  And you’ll see if it’s real or not. The heart tells the truth.”

In the end, we must always decide whether to believe or not. That’s what art has always been about. You either see the 3D optical illusion or you don’t. No matter your own conclusions, we must thank Banksy and Mr Brainwash for shining such a incisive mirror back at ourselves. In the end, isn’t that what art is all about?

Exit Through the Gift Shop is currently playing in limited theatres across North America, and Mr Brainwash Icons exhibit is extended in NYC through the end of May.

This article is written by Michael Margolis and originally published on PSFK.com, an online magazine devoted to marketing, art, culture, and design.